In the small town of Nottingham PA, there exists a unique park that offers visitors a chance to visit a rare ecosystem found only in this region: Nottingham Serpentine Barrens Park.  Rich in history and ecology, this Chester County attraction rests within a series of barrens that straddle the boundaries of Pennsylvania and Maryland.  The area is said to feature desert-like conditions due to the level of toxicity caused by unusually high amounts of metal in the soil, combined with a lack of nutrients.  As such, only a limited number of plants can grow in the area, some of which are found nowhere else in the world.  Due to the sunbaked nature of serpentine rock, such areas also typically boast warmer temperatures than the nearby region.

Upon entering, the park seemed anything but desert-like.  Tall trees, both pine and deciduous native throughout the area, were found in abundance just as they are across the northeast.  They also appeared to be at the peak of their fall colors, leading to anticipation for the coming autumn hike.  A small fenced area near the entrance offers visitors a preview of the serpentine grasses found throughout the area. 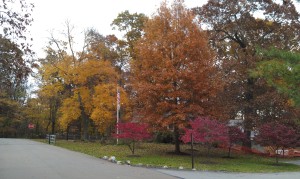 After parking, a nearby map detailed the various trails found throughout Nottingham Park.  On the western side of the park, we discovered a little spot dubbed “The Mystery Hole.”  Unable to resist, we decided to begin our autumn hike at the Feldspar Trail leading to both it and the Buck Trail.

The trail system is surprisingly large for a county park.  We were led through forests and fields of serpentine grass with large creeks beside the trail.  Though the path occasionally featured large rocks or fairly deep (though easily avoided) holes, the trails were well maintained and easy to navigate.  The fall foliage seemed rather vibrant in some areas, but also very bare in others.  Along the way, various signs would provide information regarding the park’s history and ecology.  Apparently, some of the nearby areas were used for mining long before the importance of the local plant life was fully understood.  Remnants of old mining sites could still be found along the trails, the most impressive being the elusive mystery hole.

The mystery hole was actually a large pond area with rock walls rising above its banks.  Once a quarry, it now serves as a point of interest for visitors.  The area is surrounded by a fence, blocking access and inhibiting the ability to take pictures.  Some large rocks nearby could have provided relatively easy access over the fence, but I’m not one to risk jail time.  The fall colors reflecting from the lake still made for a serene setting, and I was able to catch a few shots through the fence of the area. 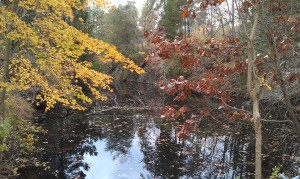 Other than the quarry sites, the environment didn’t seem very different from those found throughout the northeast, though the fall colors still made for a great autumn hike.  The serpentine grass largely resembled overgrown grass found in any field, though I’m not sure how it would look during the spring or summer.  And, to be fair, we only covered a small section of the entire park.

A field of serpentine grass with fall foliage rising in the distance.

A sign revealing the true identity of the mystery hole

A stream flowing through Nottingham park.

A field of serpentine grass with fall foliage rising in the distance.

2 thoughts on “An Autumn Hike Through the Serpentine Barrens in Nottingham Park, PA”